Outlining With Robert Pattinson: The Resolution

At long last, we come to the final installment of my Outlining with Robert Pattinson series *sigh*
The part I'll be discussing today is the one most readers are dying to get to. What will happen after all those pages of conflict/backstory/world building/superamazeballs action???
Yep. Today I'll be tackling...

THE RESOLUTION
Or denouement, if you prefer the term.
So. Your main character has faced the antagonist. They have battled it out, WWF style. There are bruises and broken bones and tears. But there's also a victory. Either your main character came out on top, or your antagonist did. Whoever won, your story's inciting incident has now been laid to rest.
Sort of.
You see, in the resolution, your MC deals with the aftermath of his victory or loss. Their internal/external conflicts have been resolved. Lessons have been learned. Your MC has done a 180 degree change--their emotional arc has morphed them from who they were during the setup to a) someone different or b) the same person, but with a different outlook.
This new outlook can be a product of one of two things:
1) Your MC wins the battle, but has lost something valuable
2) Your MC loses the battle, but has gained something they never thought they'd value
This makes your resolution a bit more complex than saying, "We won, we won, we won! Now let's go PARTY!" or "FML, we lost... F. M. L!!!!!!" Everything in your manuscript has been pretty layered so far, right? Why not make your ending just as interesting?
Other things to worry about at this stage of the story: 1) have I answered all the questions I introduced during Acts I and II?; 2) is there any plot hole I forgot to fix?; 3) are my scenes full of tension?; 4) do my scenes propel the plot forward, or drag it down? (cut those that drag it down!); 5) is my resolution a product of the hints I've dropped throughout the manuscript? (no Deus ex Machina, please!). Of course, you'll come up with more details to work with, but these are the ones I'm always freaking out over.
So. During the resolution, your MC has two options. They could be walking around like this: 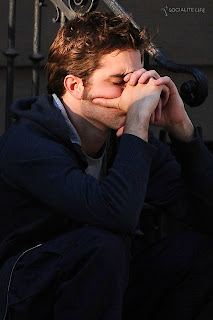 "Leonardo DiCaprio can suck it. I'M the king of the world!!!!!!"-- direct quote from your WIP
It's up to you to see which Robbie P fits best with your story: loser or king.
Aaaaand that's a wrap! Hope you've enjoyed my outlining series, and that Robbie P has been useful to your manuscript! Because, come on, the dude is useful for almost every writing analogy ever made.
Now if you'll excuse me, I must go work on my outline...
Tell me: how do you feel about the resolution? Do you know how your story will end before you even start writing it? Or do you figure it out as you go?
Posted by Amparo Ortiz at 7:27 AM