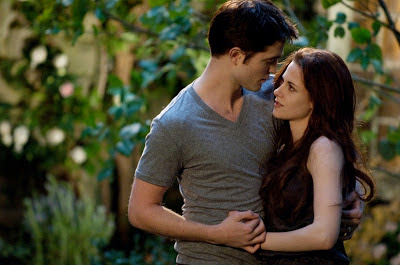 I saw you this past Friday. As usual, my excitement level was mild. I went in knowing exactly what was going to happen, as I've read all the books. There was nothing about you that was going to surprise me. Yes, film critics and Stephenie Meyer herself had said there was a twist ending. But I was all HAHAHAHA YOUR TWIST DOESN'T SCARE ME. Besides, half-vampire baby getting ripped from Bella's womb? How can you possibly top THAT?

I had seen the trailer, of course, and I knew they'd added a fight sequence to make the movie more exciting than the book (where your characters spend A LOT of time talking about possibly fighting). Not even this was enough to give me goosebumps. "It doesn't matter that they've added a fight sequence," I said. "It'll just be a whole bunch of vampires hitting each other. Then they'll be all benevolent and call it quits because what is the use of war when we can talk it out."
Then you did it, Breaking Dawn Part 2. You surprised me.

AND YOU MADE ME SCREAM AND OMG I CAN'T EVEN REMEMBER WHAT I DID BECAUSE I JUST COULDN'T HANDLE ALL THE FEELS.

The theater was full of teen girls, Breaking Dawn Part 2. Do you have any idea what kind of badass ability teen girls possess? They can shriek really, really, really, really, really loudly when they're pissed off. Or sad. Or both. I am not a teen girl, but my gift has traveled with me into adulthood. Much to my father's dismay (yes, my father saw the movie with me. I know--I can't believe it, either).

What I'm trying to say is this: I almost suffered heart failure. The world almost lost one of its most deranged inhabitants. You, Breaking Dawn Part 2, gave me the joy of belonging to an audience with so. Much. Passion. The twist was... perfect. The ending was... sweet. And fitting. I didn't cry, obvi. I don't cry over anything other than Harry Potter, The Walking Dead, and when Frodo totally bails on Sam to get played by Gollum in The Return of the King. But I did feel the years in the franchise. I felt each and every movie, each and every book. And this might sound weird, but I wasn't as happy for Bella finally finding her place in the world.

I was happiest for someone else. 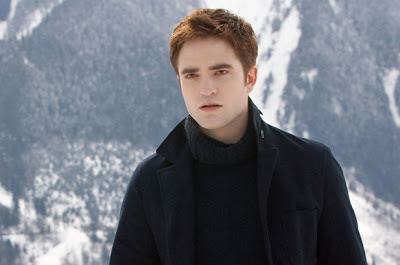 This dude tried to kill himself once. This dude spent a bazillion years hating himself, his existence, and feeling empty. But on that last page, in that last scene, this dude's a man. A dead one, but still.

Purpose, Breaking Dawn Part 2. You were all about giving your characters purpose. So thanks for that. And thanks for making me scream at the movies again (hadn't done that in a while).

The Sort Of Fan You Almost Killed.

Labels: about me, open letters, randomness, Reel YA, Robert Pattinson, YA