Know Your Flaws... And Make Them Strengths

So. There's this TV show you may or may not know about... 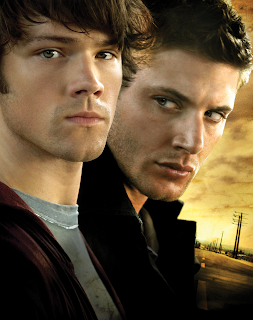 Some people call it SUPERNATURAL.
I call it Best Thing EVER.
Anyway, SUPERNATURAL is usually heavy on the grim and gritty, but the creator and executive producers always make sure to toss in a few episodes to lighten the mood. Recently, they aired this kind of episode. It's called "The French Mistake". 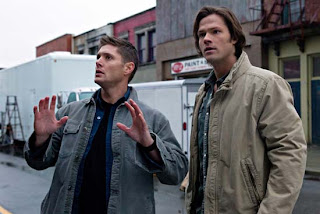 In this episode, brothers Sam and Dean are sent to an alternate reality. Not only do they discover they're actors playing two dudes called Sam and Dean on a TV show, but their real names are Jared Padalecki and Jensen Ackles.
Which are the actors' real names in real life.
Oh, and they also discover their angel BFF, Castiel, is some dude named Misha Collins.
And he's obsessed with Twitter. 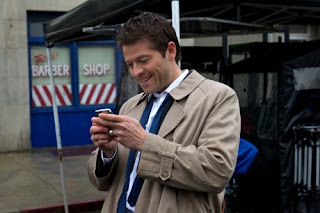 Yeah.
So, the point of this post is to show pics of my husband and brother-in-law illustrate a couple things about the art of writing. In "The French Mistake",  SUPERNATURAL pokes fun at itself. Hard. Some jokes the show made involved:
1) Low ratings
2) Episodes and storylines the fans h-a-t-e-d
3) Disputes between cast members (due to diva-like behavior)
3) Disputes with the network's president
4) Creative differences between writers and executive producer/creator, Eric Kripke
5) Kripke's outlandish ideas for new TV shows
6) Jensen's breakout role in DAYS OF OUR LIVES (don't ask...)
7) Jared's marriage to actress Genevieve Cortese, who played a villain on the show
8) How corny Jared and Jensen can be in interviews
9) How corny Misha can be all the time
Some of those jokes were just that--jokes. But other things, like the low ratings, fan-hated episodes and storylines, and network disputes, are real. SUPERNATURAL took what doesn't work and turned it into something useful. According to about a zillion blogs, "The French Mistake" is now one of the show's best episodes.
Which leads me to writing.
Spotting your flaws isn't easy. Sometimes it takes a lot of writing and reading. Sometimes it takes other pairs of eyes to spot them for you. What matters is that you give yourself permission to suck, then take that suckage and transform it into brilliance. Don't get discouraged because you're not doing your best, or because you think you're a long way from improving. You'll never get better if you don't keep going.
One day, you'll look that suckage in the eye and say, "Suckage, you've been PWNED!!!!!!"
:)
Now tell me: do you have any writing flaws that are frustrating you? If so, how do you make them strengths?
Posted by Amparo Ortiz at 6:20 AM