Fess Up Friday: A Series I Wish I'd Read Sooner

So. There's this author. Her name is Richelle Mead.

She wrote this book: 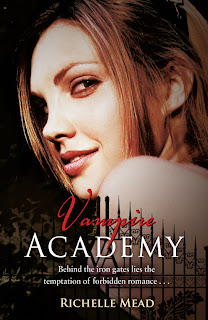 And OMFG it is incredible.
No, I am not exaggerating.
It. Is. Incredible.
If you're not familiar with the book, I give you le blurb:
St. Vladimir’s Academy isn’t just any boarding school—it’s a hidden place where vampires are educated in the ways of magic and half-human teens train to protect them. Rose Hathaway is a Dhampir, a bodyguard for her best friend Lissa, a Moroi Vampire Princess. They’ve been on the run, but now they’re being dragged back to St. Vladimir’s—the very place where they’re most in danger. . . .


Rose and Lissa become enmeshed in forbidden romance, the Academy’s ruthless social scene, and unspeakable nighttime rituals. But they must be careful lest the Strigoi—the world’s fiercest and most dangerous vampires—make Lissa one of them forever.
Confession: I'd known about the Vampire Academy books for about two years now, and I hadn't picked them up. I wanted to read them, but I kept buying other books first. Then my mother bought all six books and read them. AND SHE WOULDN'T STOP HARASSING ME. Or talking about some Russian dude named Dimitri.
So I read Vampire Academy.
And my life has changed forever.
I really, really, really wish I'd read Mead's books sooner. Not only do I enjoy her storytelling, but I learn from it. A lot. The characters, world-building and HOLY COW IS THIS REALLY HAPPENING plot twists are what make her such an amazing author to me. And Rose? She's now one of my Top 5 Best YA Heroines of all time. Maybe even Top 3. Maybe even #1.
Yes. I just said that. Sue me.
Oh, and that Russian dude named Dimitri?
O_O
That is all.
But I'm curious: is there a series you wish you'd read earlier?? Which one? *takes notes*
Posted by Amparo Ortiz at 9:25 AM 5 comments:

Labels: about me, book recommendations, Fess Up Friday, my heroes, writing, YA

So. I seem to have a bit of an obsession with book series.
Which means I read more sequels than standalones.
That's changing, though, with my 30 Contemp Books Challenge, in which I aim to read 30 YA contemporary novels this year. I'm reading a lot more standalones in YA contemporary, and I love them. The minute I finish, I have all the freedom in the world to discover another author.
But when it comes to series, that's not the case.
And it is because of this that I've compiled a list of Things I Like In Sequels As A Reader:
1) A new question/mystery
I love sequels for two main reasons: a) I get to spend more time with the best characters ever, and b) I get to see them react to different dangers/problems and higher stakes. BUT these dangers/problems and higher stakes are much more enjoyable for me when they're a product of a new question or mystery. Sequels that are pretty much the characters dishing out new information and plotting against the baddies are okay, but not as compelling to me. So yeah. New story + New question/mystery = Awesome sequel.
2) Deeper characterization
Since I already know the MC and supporting cast, I want to be surprised. What secrets are they hiding? Do they have talents they didn't know about? Did they get a crush on that girl/guy they thought sucked at life? To me, it's all about taking those characters into new directions, and peeling a layer off them. Fears and goals can be either strengthened or changed. Anything to get a clearer picture of who I'm reading about is fine with me.
3) Fresh world-building
Sequels can have brand new settings. Or, if it's the same setting, new rules. In some cases, it's a new villain, instead (usually stronger and more dangerous than the last one). Whatever the case, I think it's exciting to throw some curve balls at characters in terms of what they can accomplish in their world, and how that world is an ever-evolving character itself. And the more unexpected and impossible-to-deal-with that world seems, the more exciting it is for me.
So there you have it, blogging buddies. If a sequel doesn't have any of those three things, I'll still read on, but not as quickly and as engaged.
But I'm curious: what do you like to see in sequels? Are there any authors you think write super awesome sequels?
Posted by Amparo Ortiz at 8:44 AM 8 comments:

Okay. There's no trailer for Snow White and the Huntsman yet.

BUT there are pictures. AND the cast was at Comic-Con.

Oh, okay... I am looking for an excuse to blog about this movie... 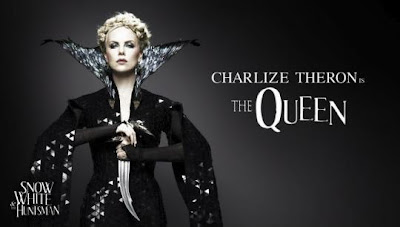 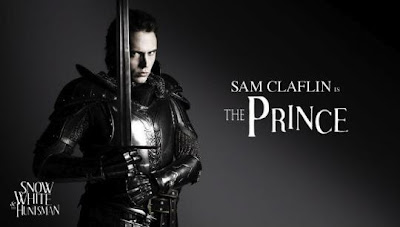 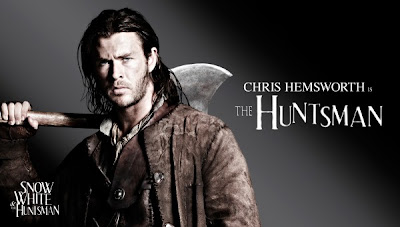 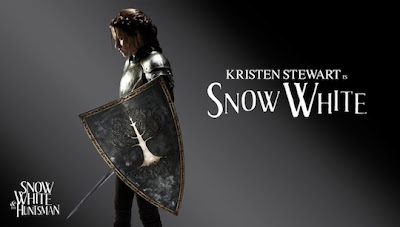 Yes, that is Kristen Stewart with a sword and shield.
WITH A SWORD AND SHIELD.
O_O
Here's a quick summary from the Huffington Post of what the flick is about:
The story, according to Entertainment Weekly, features Snow White, having escaped from the Evil Queen's imprisonment, off in the woods, being chased down by the Huntsman. He's charged with returning just her heart, but when he can't bring himself to kill her for it, they become partners in the fight against the queen.
SOLD.
Now tell me: is this new spin on Snow White interesting? Or do you think fairy tale retellings should be left alone?
Posted by Amparo Ortiz at 1:27 PM 11 comments: 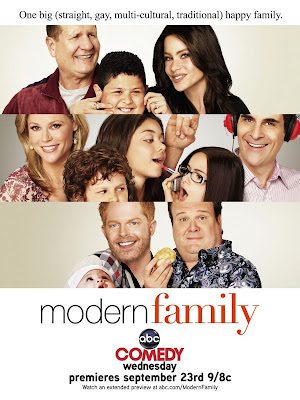 ABC's Modern Family.
I am a huge fan of funny. But to me, the best funny comes with the serious. Modern Family is that show. It makes you laugh and think at the same time. And it has a ton of heart.
The cast is uh-may-zing (Sofia Vergara has never made me laugh harder).
And the characters? THE CHARACTERS. This show is the definition of diversity. I cannot begin to tell you how refreshing it is to see non-stereotypical stereotypes! *fist pump*
I'm almost done with Season 1, and believe me, I will tear through Season 2. Hopefully, there'll be room in my TV schedule this fall to include Modern Family, and I won't have to watch it on a computer screen.
*crosses fingers*
So yeah. Modern Family. So awesome, it's insane.
Now tell me: do you watch Modern Family? If not, what shows have you discovered a little later in life that you've ended up loving?
Posted by Amparo Ortiz at 6:33 AM 3 comments:

So. Harry Potter and the Deathly Hallows Part 2.
Folks, I saw it.
Yesterday.
And I plan on seeing it again.
As many times as I can.
Yes, the franchise is over. There will be no more books or movies. And while this makes me very sad, I can only be grateful: 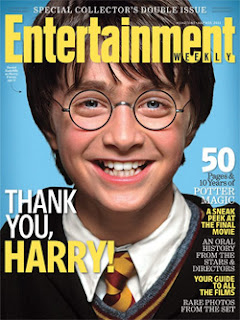 You changed my life for the better.
Posted by Amparo Ortiz at 5:33 AM 4 comments:

Labels: about me, Harry Potter, my heroes

Fess Up Friday: Will Harry Make You Cry?

Welcome to another edition of Fess Up Friday!!

My question for y'all today is: do you think you'll cry while watching the last Harry Potter film?

"Come and get me, Lizard Face!"--Harry Potter 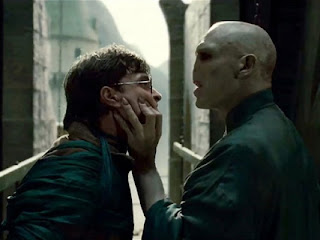 "WHO ARE YOU CALLING LIZARD FACE?????"--Voldemort.

I will lose my very soul.

Wake me up when July ends, folks.

*runs off to a corner and sobs*


What about you? Will seeing Harry one last time make you cry?
Posted by Amparo Ortiz at 11:41 AM 11 comments:

Labels: about me, Fess Up Friday, Harry Potter, randomness 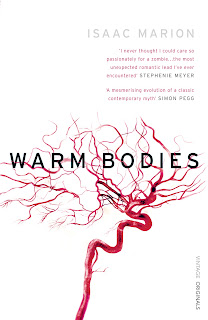 Confession: I love query letters. Reading them. Writing them. Whatever. I can't get enough of them.
Yes, I am weird. But you knew that already, didn't you?
Anyway, I thought I'd share a few of the most awesomesauce queries I've ever read. This is mostly because I wanted to compile them all in one place, but also because I feel like they help writers struggling over their queries. Seeing how others boil down their stories into 3-4 paragraphs is both encouraging and educational :)
In no particular order, here are some of the best queries in the universe:

1) Lisa and Laura Roecker's query for THE LIAR SOCIETY

5) Kody Keplinger's query for THE DUFF

7) Gennifer Albin's query for CREWEL
(I actually stole the idea for this post from her Friday Five about queries. Yes, I am evil...)


8) Miriam Forster's query for THE HOUSE OF A THOUSAND DOLLS

If you haven't read any of them, or just a few, I suggest taking a closer look at every single one. They're that awesome, I promise you.
For those of you in the querying trenches, best of luck! *hugs*
Now if you'll excuse me, I have to go write a query letter...
*cracks knuckles*
How about you? Any queries you love that aren't on this list? Any queries you'd love to see, like one from your favorite book? Share them with me in the comments!
Posted by Amparo Ortiz at 5:29 AM 10 comments: