It's blog chain time, folks. This round is brought to you by Alyson, who wants to know:

Have you developed thick skin as a writer? How do you handle having your work critiqued? Do you love revising? Hate it?

So. Thick skin. I totes have it. I didn't always have it, though. 2009. That's when I contacted my first (and still!) CP, Lindsay. If Lindsay pointed something out as sucktastic, I would immediately feel like a sucktastic failure of a writer. That was more my self-esteem than Lindsay's approach to crits (because she is awesomesauce). Luckily, I've spent the past four years embracing my work as a thing that's outside of me. Yes, it came from my brain, but whatever type of feedback I get on my work isn't feedback on me as a person. If my manuscript is sucktastic, then I must fix it. Period. I can bemoan cutting a chapter/scene I thought was cool, but I'm still cutting it if it doesn't add anything to the story. That's the kind of perspective a CP can help you with. It's also a lesson I struggled to learn, but I'm thrilled I finally did. :)

As for revising, my stance remains the same. I LOVE IT. Love, love, love. I prefer it to drafting any day of the week. I'm still hard at work on my WIP's second draft, though, so I'm slower than I want to be. Especially since I have at least two more drafts to go through. I cannot wait to send the final draft to Lindsay, as well as my other CPs, Kaye and Natasha.

I feel sorry for them already. *giggles*

Thanks to Alyson for the awesome topic! Check out what Cole had to say, and stay tuned for Margie's post tomorrow! :)

Some of you have read my 10 Killer Queries That Worked post. It features 10 of my absolute fave query letters for manuscripts that ended up being published. Well, since I'm always on the hunt for a new query to drool over, I figured I'd turn the post into a series.

Okay. Let's get to it. *cracks knuckles*

Here is another batch of amazeballs queries:

So there you have them! I hope they prove as helpful as the first batch :)

Posted by Amparo Ortiz at 9:26 AM No comments:

In Defense Of Non-Badass Characters: Carol From THE WALKING DEAD

So. There's this show I love, right? I know, I know. There are TONS of shows I love. But just hear me out, okay? This is a show I've never blogged about! At least not in full-length post mode. I've chosen to do not one, but TWO posts about this show, so you know I mean business, y'all.

One of these non-badass characters is Carol. 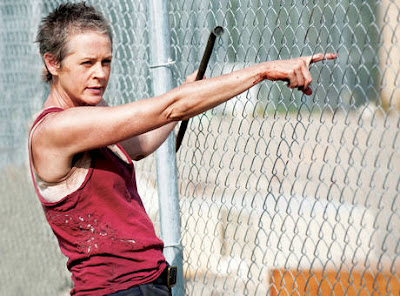 **WARNING: TONS OF SPOILERS AHEAD**

I cheer SUPER LOUD whenever Michonne or Daryl or Rick or Another Badass kills Walkers in stellar fashion. I understand why Michonne and Daryl are fan favorites. I would also riot like a madwoman if they ever get killed off. But I am unabashedly attached to Carol. In Season 1, we see her as the mother of a little girl named Sophia, and the wife of a jerk who beats her. She stays with said jerk because they're married and the zombie apocalypse is here and she doesn't think she can protect Sophia on her own. But when the jerk is eaten by a Walker, Carol and her daughter must fight the good fight without him.

Season 2 Carol is even more heartbreaking. Not only does Sophia vanish into the woods after a run-in with some Walkers, she later reemerges as a Walker herself. To say Carol is devastated is an understatement, folks. The moment I saw Sophia walking out of Hershel's barn, all Walker-fied, I told myself, "Carol's done." I had the gall to think this woman had met her end. She'd been robbed of the only thing she kept fighting for. Why else would she carry on?

Carol proved me wrong, and I'm thrilled she did. In Season 3, there is a moment when viewers wonder whether Carol is alive or dead. The prison where the group is hiding out is infested with Walkers. Carol's stuck in a corridor with T-Dog, who sacrifices himself so she can escape. Viewers then see when Daryl finds Carol's knife on the prison floor, along with her head scarf, leading everyone to believe she's dead, after all. BUT SHE'S NOT. She was hiding behind a door in that very corridor, too weak to call out for help. After Daryl carries her back to the cell block where the group lives, she rejoins them and does her best to care for Rick's baby daughter/Daryl/everyone else.

My point? Carol has been through stuff, y'all. Heavy, horrible stuff. Does she remain a victim and weep in a corner while others risk their lives for her? No. Does she grab a bunch of rifles and shoot up every single Walker she can find? No. She learns how to defend herself so she can defend the ones she loves, but she doesn't rely on this knowledge to get by day to day. Carol is not a badass in the traditional sense. She can't wield a katana like Michonne. She can't use a crossbow or hunt or ride a motorcycle like Daryl. But she can survive. Not just with a rifle, but with her heart. There's a reason why Rick is overjoyed during a moving scene in Season 3, where he sees her after the Walker attack. Carol is his friend, but she's also one of the strongest members of his group. She's stronger than him. It's her strength after so much loss, her loyalty to him after so much heartache, that Rick cherishes. In a way, I think Rick wishes he could be that strong.

So there. The non-badass characters are gems, too. Carol is proof of this and more.

Do you watch The Walking Dead? If so, what do you think about Carol? Is she as awesome as I think she is?