Books You Should Read: THE FALSE PRINCE by Jennifer Nielsen 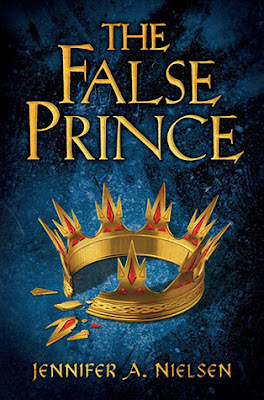 THE FALSE PRINCE is the thrilling first book in a brand-new trilogy filled with danger and deceit and hidden identities that will have readers rushing breathlessly to the end.

In a discontent kingdom, civil war is brewing. To unify the divided people, Conner, a nobleman of the court, devises a cunning plan to find an impersonator of the king's long-lost son and install him as a puppet prince. Four orphans are recruited to compete for the role, including a defiant boy named Sage. Sage knows that Conner's motives are more than questionable, yet his life balances on a sword's point -- he must be chosen to play the prince or he will certainly be killed. But Sage's rivals have their own agendas as well.

As Sage moves from a rundown orphanage to Conner's sumptuous palace, layer upon layer of treachery and deceit unfold, until finally, a truth is revealed that, in the end, may very well prove more dangerous than all of the lies taken together.

An extraordinary adventure filled with danger and action, lies and deadly truths that will have readers clinging to the edge of their seats.

I love me some fantasy. But when the word 'fantasy' comes to mind, I usually picture epic battles, beautiful (and dangerous) landscapes, tons of magic, maybe a dragon or two. Nielsen's The False Prince lacks most of these, but it sure is one magical novel. You see, I might love me some fantasy, but I love me some character development even more. Sage, the main character, was nothing more than a joy to read about. He's scrappy, outspoken, and kind. When he's picked as one of the orphans to impersonate Prince Jaron, he doesn't jump up and down at the chance of living like royalty. He understands the risk involved--he must lose his identity and claim one he doesn't want.

The one thing I loved most about Sage was his fear of being alone. He struggles to find something most of us crave as well--a meaningful connection to another person. That doesn't mean Sage is looking for love (even though he has a love interest). Sage is more concerned about facing his fears with little to no support. He acts like he can handle them, of course, but deep down, he wants someone to be there for him. This has a lot to do with his backstory, which I absolutely loved discovering. It's twisty and OMG and perfect. :)

Oh, and something else I loved: Imogen. She's a mute girl who serves Conner, the regent plotting to turn one of the orphans into Prince Jaron. Imogen's suffered both physical and psychological abuse at Conner's estate, and she deals with her pain in the most poised, admirable way. Sage can't help himself from wanting to protect her, and I rooted for him every single time. As the story unfolds, Imogen puts her job and life on the line to help Sage as well, making her a total BAMF in my book.

The False Prince is a fast-paced tale of a boy who needs to survive, and wants to live a better life than the one he's been given. With high stakes, surprises and calculating characters galore, I recommend it to anyone looking for a fantasy read that's heavy on politics and mind games.

Labels: book recommendations, books you should read, characterization, YA