Don't fret! This post has nothing to do with Miley Cyrus. *wipes sweat from brow*

This is a short list of seven random things about me. Without further ado, I give you "me":


7) I'm Puerto Rican. Born and raised in Puerto Rico, I have grown accustomed to warm weather and mofongos. What are mofongos, you ask? Oh, no big deal. Just the reason why I refuse to leave my country. Sure, they make mofongos in other parts of the free world, but I'm kind of obsessed with a local restaurant about five SECONDS from my house.

Anyway, I love being Puerto Rican. I love being a Latina. I'm fluent in both Spanish and English, which puts me in the difficult position of having way too many books to read by a bazillion authors. Tough luck, huh? The best part of my day is waking up knowing that the ocean is minutes away from my house. I'm not huge on going to the beach, but something about seeing all that blue makes me giddy.

And did I mention the mofongos?

6) I have a B. A. in Psychology. I know what you're thinking... But no, I'm not big on dissecting every little thing people say or do. I don't spend my days analyzing the intricacies of human behavior. I'm not really prone to study how people interact with each other at all. And I don't-

Oh, who am I kidding?

I LOVE doing all that stuff. But do I do it all the freaking time? No. Well, maybe for research purposes (manuscript research, I mean...). My love for all things clinical led me to the psych department as soon as I finished high school. There, I learned many things. Some I will never use, others will follow me wherever I go. But mostly, I learned about myself. And that's one lesson I will never disregard.

And no, I'm not a Freud fan. There are other theorists, you know. Just saying.

5) I'm a Law school dropout. Yep. Lasted one year. Learned a lot, but didn't feel that spark. You know, that I-wanna-be-a-lawyer-forever-and-ever spark. Just wasn't for me. But I made a TON of great friends there, though. The type of friends that always stick with you no matter what. And in case things ever go south, like if I somehow happen to murder Spencer Pratt with a crowbar, my lawyer buddies will back me up and plead temporary insanity for me.

See? Law school is good for something.

4) I went to Europe at sixteen. There are two reasons why this is a big deal to me. First, I'm from a barely middle-class family who struggles with money on a daily basis. You can't even imagine the sacrifices my parents made to get me on board that damn plane for my eleventh grade school trip (which turned into a plain old tourist trip, since 90% of the students backed out ONE DAY BEFORE leaving... I'll explain myself in another post). Second, I had only traveled to Disney, the Dominican Republic, and a bunch of Virgin Islands before that. So, yeah. That trip was pretty special to me.

Which countries did I visit? France, Germany, Denmark, Sweden, Norway, Netherlands, and Belgium.

And I'll never forget it.

3) Movies are my kryptonite. This is entirely my dad's fault. As a child, he fed me fantasy and horror instead of Gerber. I don't hold it against him, but it's important to point fingers sometimes. It's more than an obsession, people. I literally cannot focus on anything else if there's a new movie at the cineplex. The poster calls my name, tempting me to surrender to its clutches, to lose myself in another world for two hours...

And no matter how hard I try, I can't resist the lure of films.

Thus the finger-pointing at my dad. You know who you are, sir. Deal with it.

This deserves another finger-pointing session. One of my best friends growing up introduced me to young adult fiction. At the time of her intervention, I was working on a (dearly departed) script. You see, the only stories I lived for came from the silver screen back then.

But then SHE stepped into the picture and ended my screenwriting phase.

And I love her for it.

I started writing my first manuscript when I turned 17, three years after I became a voracious reader of YA. It genuinely sucked, to say the least. I shelved it as soon as college started, and any hope of returning to it left the building.

Then it came back to bite me in the ass several months later. Ideas kept taking over when I was supposed to be learning about Freud.

Maybe that's why I don't like him very much...

Anyway, it was impossible to keep it all in my head. Soon enough, my laptop endured several sessions of use. Years later (blame my major and Law school...), I produced a novel.

Which still sucked. But I queried anyway. And got rejected.

I scrapped it again, hoping that one day I can get back to it and make it better. Much better.

Right now, I'm still reading YA and other genres like a maniac (I'll talk about my faves later on). I'm currently working on another manuscript, a YA paranormal romance. This one feels much more appropriate than my first attempt, and I'm giving it my all. Hopefully, it will be done in a few months, and I'll be ready to query again.


And last, but certainly not least... 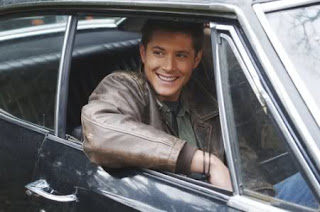 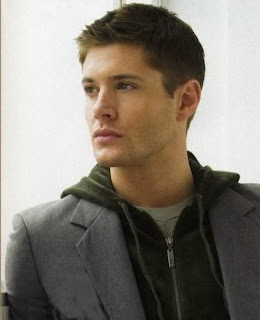 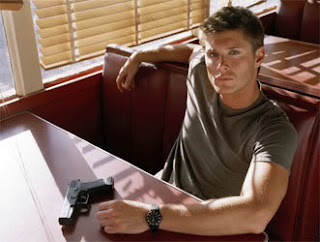 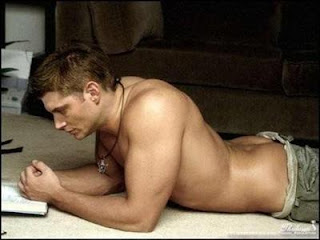 Nuff said.
Posted by Amparo Ortiz at 5:47 AM

Labels: about me, Jensen Ackles, randomness