Character Interview With Kody Keplinger: Bianca From THE DUFF 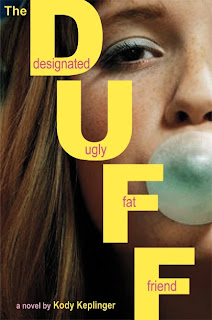 Seventeen-year-old Bianca Piper is cynical and loyal, and she doesn't think she's the prettiest of her friends by a long shot. She's also way too smart to fall for the charms of man-slut and slimy school hottie Wesley Rush. In fact, Bianca hates him. And when he nicknames her "Duffy," she throws her Coke in his face.

But things aren't so great at home right now. Desperate for a distraction, Bianca ends up kissing Wesley. And likes it. Eager for escape, she throws herself into a closeted enemies-with-benefits relationship with Wesley.

Until it all goes horribly awry. It turns out that Wesley isn't such a bad listener, and his life is pretty screwed up, too. Suddenly Bianca realizes with absolute horror that she's falling for the guy she thought she hated more than anyone


Lindsay and Katrina, my amazing Operation Awesome friends (and crit partners), were nice enough to deal with my fan-girling and ask some questions, too. So let's give a warm welcome to Ms. Bianca Piper!!

Lindsay: Your favorite book is The Catcher in the Rye. If you could choose one Holden quote as your motto, what would it be and why?

I don't think any of Holden's quotes would be my motto. Don't get me wrong, it's my favorite book, and Holden is an awesome character, but I think he's awesome because he's so screwed up. I know I can be bitter, but he's way worse than me . . . . right?
Anyway, I couldn't have any of his quotes as my motto. Though, all of his quotes about "phonies" rock.

Katrina: In your experience, does the way a person presents himself or herself usually jive with what's inside as well?

Not really, I guess. I mean, look at Casey. The girl is tall, thin, gorgeous, and a cheerleader.  In the teen comedy, she'd be the bitchy cheerleader. But she's so, so not. She's freaking awesome and funny and smart.
I think our stereotypes of what looks "mean" are ridiculous, personally.

Amparo: Your favorite band is Paramore. Talk about your favorite song and why it rocks your world.

Paramore's best song is totally "Playing God" from their new album.  The line, "Next time you point a finger, point it to the mirror" is brilliant. People need to work on their judgment of others . . . me included, I know.

Lindsay: You threw Coke in Wesley's face. If there are three words to describe how it felt, what would they be?

Katrina: You've been described as loyal. Is there anything friends or family could do that would automatically sever your loyalty? In other words, what do you consider unforgivable?

Off the top of my head, I can't think of anything. I will say, that as far as I can tell, almost anything is forgivable.  Forgettable, though, maybe not so much.

Amparo: Girls go through so much in high school, whether it’s peer pressure, exploring their sexuality, family issues, or all of the above. If given the chance to speak one-on-one, what piece of advice would you offer them?

I'd tell them what I learned the hard way. Don't judge others - including yourself - based on what others think. Everyone has more going on than what you see on the surface, and it isn't anyone else's place to judge them. By the same token, what others think of you doesn't have to dictate who you are.

A humongous thank you to Bianca for stopping by, and to Kody Keplinger for giving her a voice in the world! Make sure you pick up THE DUFF if you haven't already, folks!
Posted by Amparo Ortiz at 6:45 AM