Douchebags Are Not Sexy, Folks

Anyone else there seen This Means War?
If so, are we agreed it's an example of a love triangle that did not work?

Since I've seen the movie, I figured I'd chime in with my views on it. Yes, I completely agree with Mindee's assessment of the love triangle--it didn't work. At all.

First of all, Reese Witherspoon's character is torn between these two men: 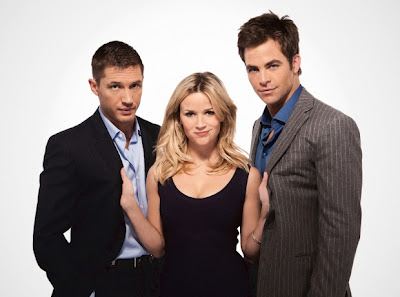 Tom Hardy on the left, Chris Pine on the right.

Yep, Reese has a REALLY HARD DECISION to make. Well, that's what it seems like on the surface. You see, Chris Pine's character is a douchebag. He knows it. He embraces it. He lives and breathes douchebaggery with no shame whatsoever. His days are spent scoping out women, using lame pick-up lines on women, flaunting his money in front of women, hooking up with women, and making fun of his best friend (Tom's character) for believing in true love.

In the end, Reese's character picks him.

SHE PICKS THE DOUCHEBAG, PEOPLE.

Does he change throughout the movie? He falls in love with Reese's character, yes, and he forsakes his womanizing ways after he falls for her. But here's my biggest problem: I have no idea why she fell in love with him. Tom's character is a gentleman extraordinaire. He treats her with respect and kindness. He takes her on romantic yet fun dates. He loves his son and introduces Reese's character to him so they can bond. Also, HE'S TOM HARDY.

I understand some women dislike men who are too sweet, too mellow, or too "safe". I get it. But for the love of Batman, why pick the dude who objectifies you and womankind in general? The same thing is often seen in fiction, which is why I'm bringing it up. A bad boy, or a boy with an edge, isn't the same thing as a douchebag. The latter is a class all its own.

Sorry, but to me, douchebags are not sexy. They are not rockin' ze boat.

Give me sweet, mellow and safe Tom Hardy ANY DAY. *stares at Tom*

Now tell me: have you seen This Means War? If so, what do you think about the ending? Do you find douchebags appealing, or are you like me and think they're not appealing at all?