Books You Should Read: SANCTUM By Sarah Fine 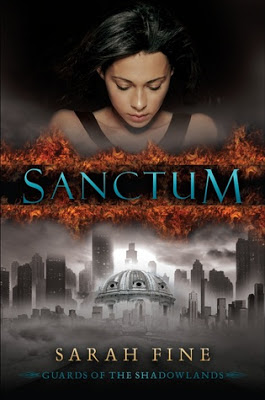 “My plan: Get into the city. Get Nadia. Find a way out. Simple.”

A week ago, seventeen-year-old Lela Santos’s best friend, Nadia, killed herself. Today, thanks to a farewell ritual gone awry, Lela is standing in paradise, looking upon a vast gated city in the distance—hell. No one willingly walks through the Suicide Gates, into a place smothered in darkness and infested with depraved creatures. But Lela isn’t just anyone—she’s determined to save her best friend’s soul, even if it means sacrificing her eternal afterlife.

As Lela struggles to find Nadia, she’s captured by the Guards, enormous, not-quite-human creatures that patrol the dark city’s endless streets. Their all-too-human leader, Malachi, is unlike them in every way except one: his deadly efficiency. When he meets Lela, Malachi forms his own plan: get her out of the city, even if it means she must leave Nadia behind. Malachi knows something Lela doesn’t—the dark city isn’t the worst place Lela could end up, and he will stop at nothing to keep her from that fate.

This is the kind of book I've been waiting for. I'm a huge fan of stories that deal with non-traditional versions of Hell, as well as with teens who struggle and hurt and make fun of things a lot. Lela Santos is that teen, and SANCTUM is that story. From page one, I couldn't stop smiling. No, the opening isn't a cheerful one. Lela and Nadia don't have an upbeat first meeting. But the way Lela's protective side comes out when Nadia needs it is refreshing. Any time a girl can help another girl out, especially in YA fiction, I just throw a fist pump in the air. Lela and Nadia's friendship has an origin, a reason, and of course, a whole lot of turbulence.

One of my absolute favorite things about Fine's novel was Nadia. Yes, Lela is the protagonist and she's perfectly awesome in her own right, but I couldn't stop myself from wanting to know more about Nadia. She's rich, beautiful, and the sweetest popular girl in Lela's school. But she's unhappy. I applaud Fine for not writing the stereotypical "OMG I'm wealthy but OMG I hate my life" kind of character. I thought Nadia's feelings regarding herself not only rang true outside the story, but also made the ending so much more tricksy to see coming. I genuinely didn't know whether Lela was going to pull off saving her best friend from the fate she chose. And at times, I was even upset that Lela felt it was her duty to get Nadia out of what lies behind the Suicide Gates. Yes, she's in trouble, and she had no idea she'd face that trouble after committing suicide, but I believed Nadia's journey was too long for Lela to come in and shorten it. I love Lela for wanting to rid her BFF of her pain and rescue her from danger, but I also think Nadia needed to be the one to grapple with what that pain and that danger meant to her. By the end of the novel, I smiled even more at how Fine handled this part of the story.

Guess what I'm going to rave about now? No, seriously. Just guess. If you guessed that it starts with 'M' and ends with 'alachi,' you are CORRECT. Sweet mother of Wookies, I heart Malachi. HEART. Whenever an author can combine badassness with a soft, gooey center, I am sold. The minute Lela meets Malachi, it... doesn't go smoothly. Like, not even a little bit. Their scenes together are brimming with tension, but it's more than the "OMG you're so hot let's make out even though you're a total stranger with weapons" kind. Like Lela, Malachi has insecurities. They both have big hearts, even though their appearances don't suggest it. She's very much a teen from today, whereas he's an older soul (the backstory explaining why this is so was one of the most compelling backstories of any character ever). The more Lela got to know Malachi, the harder she fell (as did I). He inspires a sense of comfort while also managing to scare the crap out of me. I wouldn't want to fight him, but he can train me any time he wants. *cough* And as a final thought, all I will say about the ending is that I almost had a FOR SERIOUS heart attack in regards to Lela and Nadia, but mostly Malachi. It's the kind of ending I'm going to think about for a really long time, both as a reader and fan of this series, and as an author absorbing as much writing tips from those better than me.

Go pick up your copy of SANCTUM, which is available for sale now!

Labels: books you should read, paranormal fiction, YA