How To Get Nothing Done: The Veronica Mars Edition

Friends, I have been pulling my hair out this week.
I have been struggling to stay afloat in my own freakin' life. Outlining, homework, critiquing, blogging--I blame none of these things for my time management problems. No, I can do all that without complaining. I like making up daily schedules and to-do lists. That's what I'm all about.
But then I discovered something... dangerous.
Lethal.
Ladies and gents, I have a new addiction: 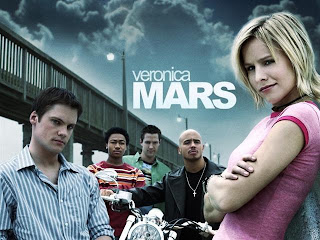 Yes, folks. Veronica Mars has ruined my life.
How did I not see this show when it was actually on TV??? Now I'm stuck spending precious time downloading episodes when I should be reading or writing! FTW!!
In case you know nothing about this show, Veronica is a sleuth (cool word, huh?). She's the daughter of a private investigator who was once the town sheriff. After Veronica's best friend was murdered, everything went to Hades--Papa Mars accused the dead girl's father, lost his job when no evidence supported his case, and Veronica fell from popular girl grace and became an outcast. Each episode has a little mystery she has to solve, plus the major story arc involving the BFF's murder.
Okay. Now I'm going to ask for a favor, blogging buddies. I need you to scold me. Slap me around. Tell me to get a grip and go back to my regular duties. Threaten to kill Jensen Ackles if I don't stop thinking about Veronica Freakin' Mars.
I'm sure I'll thank you... someday... maybe...
Posted by Amparo Ortiz at 7:56 AM