Yep. I have another amazing guest post (and first ever giveaway!) for you today, folks. I'm thrilled to welcome YA author Miranda Kenneally to the blog! Since Miranda's debut novel, Catching Jordan, features a girl who plays football, I figured I'd ask her about her favorite YA sports movie. (Bonus points: she chose a movie I LOVE).
Take it away, Miranda! 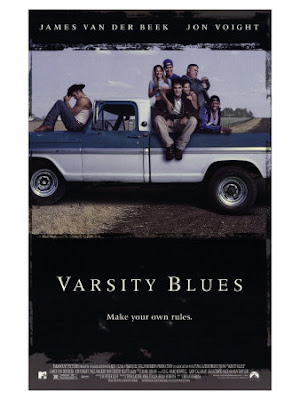 Varsity Blues: The Ultimate YA Sports Film
Varsity Blues came out when I was 16. The movie is R-rated so I had to buy a ticket to “She’s All That” and sneak into Varsity Blues. Also, I went with a guy who turned out to be a major asshole, but that’s beside the point because the movie was INCREDIBLE.
The plot of the movie is thus: Mox has a great family and a super cute girlfriend, but he wants out of his football-obsessed town. He wants to go to Brown University. Mox is very smart and wants to focus on school, but everyone expects him to play for the football team because that’s what athletic guys are supposed to do in Texas. Mox finds out that the coach has been forcing the star quarterback, Lance, to get cortisone shots in his injured knee so he can keep playing. Then Lance gets sacked hard and the coach denies he knew anything about Lance’s injury.
Mox has to step up and take over as quarterback for the rest of the season because Lance’s knee is ruined. Mox is disgusted with the coach and his overbearing ways, and throughout the season, Mox lets the coach bully him and threaten his dreams of going to Brown. Finally, Mox steps up and confronts the coach, which inspires the rest of the team to confront their bully of a coach too.
Why is this movie great YA? It starts with a serious problem. Mox sees that his best friend Lance is injured, but the coach tells Mox it’s none of his business. When Lance gets hurt, it inspires Mox to confront the issue.
YA is all about hope and Mox has big dreams he wants to fulfill. Other secondary characters have similar dreams about wanting to move beyond football, and Mox inspires them too.
Ultimately, Varsity Blues isn’t about football. It’s about standing up for what’s right. It’s about confronting bullies. It’s about going after dreams. That is Reel YA.
(*snickers*)
Miranda Kenneally is the author of CATCHING JORDAN, a contemporary YA novel about football and femininity, coming in December 2011. Other books include PLAYING PARKER (fall 2012) and BAD, BAD THING (spring 2013). Miranda is the co-creator of Dear Teen Me. The Dear Teen Me Anthology will be published in late 2012. She enjoys reading and writing young adult literature, and loves Star Trek, music, sports, Mexican food, Twitter, coffee, and her husband. Follow her on Twitter or Facebook. Miranda is represented by Sara Megibow at Nelson Literary Agency.
A huge thanks to Miranda for stopping by! And to celebrate the release of Catching Jordan, I'm throwing a preorder giveaway! There are two rules to enter the giveaway: 1) be a follower; 2) comment on this post. That's it! Contest ends on November 2nd,  and I'll be choosing one winner through random.org.
Here's Catching Jordan's official blurb: 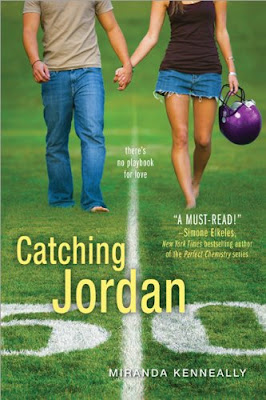 What girl doesn't want to be surrounded by gorgeous jocks day in and day out? Jordan Woods isn't just surrounded by hot guys, though-she leads them as the captain and quarterback of her high school football team. They all see her as one of the guys, and that's just fine. As long as she gets her athletic scholarship to a powerhouse university. But now there's a new guy in town who threatens her starting position... suddenly she's hoping he'll see her as more than just a teammate.
Best of luck to all who enter!! :)
Posted by Amparo Ortiz at 4:22 AM