Movie Review: 10 THINGS I HATE ABOUT YOU 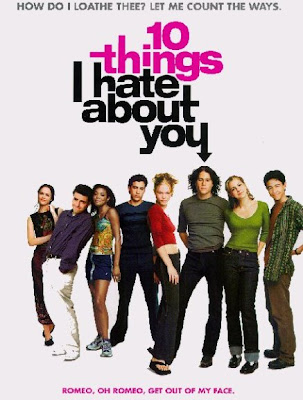 Official logline:
A film inspired by the classic Shakespeare play, "The Taming of the Shrew", set in a modern day high school.

My review:
10 Things I Hate About You hit theaters in 1999. By then, 90% of the actors in the film were total unknowns. In particular, these two: 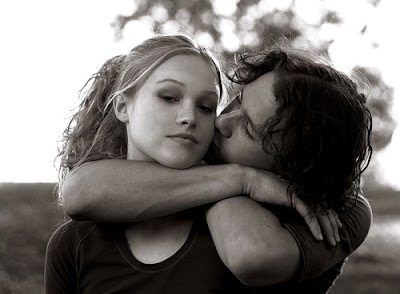 Julia Stiles and Heath Ledger as Kat Stratford and Patrick Verona
I'm not sure if there's a more iconic couple in teen films from the 90s. To me, Julia and Heath made this movie. Not only are their characters compelling on their own, but the. Chemistry. Between them. We all know the formula, don't we? Bad Boy woos Tough Girl. Against her better judgment, Tough Girl falls for Bad Boy. Bad Boy breaks Tough Girl's heart. He apologizes, she forgives him, and they live happily ever after.
Then we have these two: 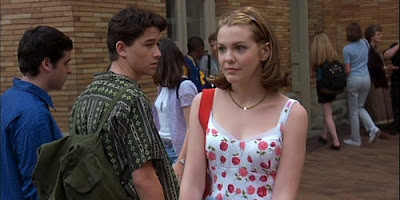 Joseph Gordon-Levitt and Larissa Oleynik as Cameron James and Bianca Stratford
Again, familiar formula. Nice Guy is fascinated by Popular Girl. But Popular Girl doesn't know he exists. Then Nice Guy pushes his way into Popular Girl's life. He saves her when she needs to be saved. Even so, Popular Girl likes Popular Douche. Nice Guy pines for her anyway, and eventually changes her mind with his niceness. Happily ever after again.
To me, these formulas don't do much for the movie. I don't particularly find films as engaging when they don't surprise me. But... wait for it... the. Chemistry. It's hard not to love these relationships. How they interact with each other. How they don't say what they mean, and don't mean what they say. And the ANGST. Oh, the angst...
10 Things I Hate About You changed many things. Among them, the actors' careers, and teens' lives. The former was due to the unexpected success at the box office. The latter? Too broad of a scope for me to pinpoint just one reason behind it. But my guess? The realness of the chemistry has something to do with it. If you haven't seen this movie, I recommend checking it out primarily for that.
Also, you will laugh your face off. Guaranteed.
Have you seen 10 Things I Hate About You? If so, what do you like most about it?
Posted by Amparo Ortiz at 5:32 AM