Outlining With Robert Pattinson: The Climax

Okay, okay. It's been a while since I continued with my Outlining With Robert Pattinson series. Blame it on life and a failing memory. But today, I'm back with more outlining goodness.
And more Robbie P.
Yes, that is what I call him sometimes. Because, you know, we're totally friends and he lets me call him that.
*blinks*
So. Last time, your MC was stuck in the turning points. Their lives changed, in a bad way. They were shocked out of their minds by the twists you put in their path. Today, I'll be discussing what comes after WTF:

THE CLIMAX
What I love most about the climax are two things: 1) at long last, your MC will go head-to-head with the antagonist/problem; 2) it will bring all those previous plot threads and turning points together. Yes, your story's climax is where the most action happens, but it's also where the internal aspect of your narrative gets pushed to its limit. Here, your characters will face the consequences of everything that's led up to this final confrontation. There's no turning back. Your MC may regret what they've done throughout the book, but they can't chicken out and run away.
I usually come up with the climax right after I settle on an inciting incident. To me, these are the easiest parts of the story to brainstorm, mainly because they're so tied to each other (main problem + how you solve it). If you're one of those writers who have a hard time seeing the light at the end of the tunnel finding a coherent way to solve your MC's problem, I suggest thinking about the following things:
1) Your MC's strengths
2) Your antagonist's weaknesses
3) Your story's theme
#1 and #2 are pretty straightforward. Your MC's strengths will help him/her beat the crap out of your antagonist's weaknesses. #3 is harder for some writers to remember during the climax. What is your story about? Redemption? Loss? Justin Bieber's hair? Your theme can guide you to a list of possibilities to solving the big picture/internal problems. With redemption, your MC can prove to everyone they've changed by doing the opposite of what other characters expect, which will also be something the antagonist doesn't expect. With loss,  your MC could sacrifice what they love most for a greater good, despite not wanting to lose more than he/she already has. With Justin Bieber's hair, your MC could...
...
...
*shrugs* You figure that one out.
So yeah. During the climax, your MC may be pissed off/sad/terrified, but they are also determined. The Big Bad doesn't stand a chance against them. Your MC walks around looking like this: 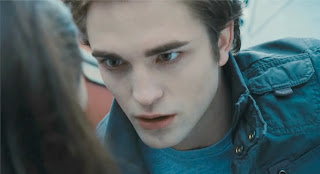 "I. Am. INTENSE!" --direct quote from your WIP
There you have it, folks. The climax makes Robbie P want to bite your neck off.
Next week, I'll finally go where every writer wants to be: the resolution.
Now tell me: how do you come up with the climax of your story? Do you think about it beforehand, or just let the story go wherever it wants to?
Posted by Amparo Ortiz at 7:05 AM